SOA refers to the design of applications via components (often referred to as "services") that expose interfaces that can be called by other client applications; multiple components can be chained together via request/reply calls to create a larger "composite application" which could potentially be considered a logical module within a larger business process. Unfortunately, the primary focus of SOA has been the concept of accessing functions in remote components to create a distributed application based on request/reply semantics. SOA infrastructure typically does not mandate any particular component-model that guides developers to create software modules based on a coarser level of granularity that matches higher-level business functions rather than lower-level technical functions. As such, typical SOA applications focus more on the notion of distributed computing rather than on the creation of reusable, modular Service Components, resulting in software systems that are difficult to develop, deploy, modify and change.

EDA refers to the design of applications as a collection of components that exchange events to perform business-functions. The major difference between SOA and EDA is that in an SOA, all intermediate Service Components suspend their operation until the relevant request/reply call returns, while in an EDA all Service Components continue to operate since their focus is on processing incoming messages and publishing outgoing messages; EDA is thus typically more efficient than an SOA approach due to pipelined, concurrent processing of events by multiple software modules chained together (since there is no waiting for blocked calls to return). Unfortunately, current EDA approaches suffer from the same problem as SOA since the focus is more on the event-exchanges between distributed software components rather than on the modularity and granularity of the components participating in the EDA process. 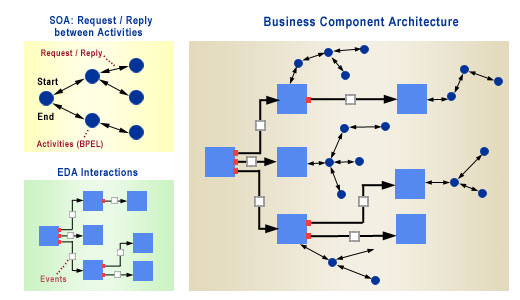 The Mission of Application Integration