"When we select an SOA platform product, we carefully evaluate implementation efficiency value per use case. With the Fiorano SOA Platform, development processes from configuration to deployment were very smooth and easy so that alternative business scenarios could be completed very quickly. In addition, Fiorano's REST adapter and event-port mechanism eliminated the effort of script coding (such as branching by IF or WHEN statements in XSLT syntax) which are required by other products. We saved significant time in creating and deploying REST APIs for business partners just by parameter settings in the Wizard."
Mr. Noriaki Aoki,
Chief Architect of Intermirage,
Fujinami implementation partner

Key points of this case study

Fujinami Towel Service (www.fujinami.co.jp, www.oshiborijapan.com/about_us_e.html) was founded in 1967 as a seller and rental supplier of "Oshibori", or "hot towel" in English. It is believed that the history of Oshibori started in the Edo period in the 1600s. At Tea houses, a piece of cloth was soaked in water, and given to travelers who stopped by to rest. It gave them comfort from their long journey and was considered to be a heartwarming gesture. The popularity of Oshibori rapidly spread in modern Japan and is now widely used in the entire hospitality industry around the world from airlines , hotels, restaurants, salons and spas. Facilities that used oshibori in large quantities began using oshibori-rental services like that provided by Fujinami.

Fujinami established Oshibori-Japan as a brand name and redefined the sensation and originality of Oshibori itself. After expanding their towel service to Kanto district (in the eastern half of Japan, including Tokyo), Fujinami began, in 1979, to handle non-towel services such as doormat rentals and the supply of sanitary materials and store articles, leveraging their established service network for the towel service. By 1999, Fujimami had achieved sales volumes of over 500 million oshiboris per month and it began aggressive expansion into the Pacific region including Vietnam and China, aiming for a "hub" business for procurement and sale of their goods

A major retail destination of oshibori is the hospitality industry and each business unit consists of small-scale shops/ restaurants. Therefore, Fujinami has been using franchisees for collecting sales orders and supplies from/to shops/ restaurants in a relevant district.

Over the years a practice developed of the franchise agency sending collected orders to Fujinami headquarters via fax. These were then manually processed at the Fujinami offices - obviously a relatively slow and error-prone process once volumes increased the way they did.

With an increase in the number of different product lines, applying sales rules which differed from franchise to franchise became a highly complex task. Order processing became cumbersome and unwieldy and frequent errors began creeping into the system leading to delays and increased costs. Manual practices such as hand writing comments and making corrections by strikethrough on the faxed order sheets further made order processing highly error-prone. If the person responsible for processing orders was absent, the entire process would come to a grinding halt.

Complex calculations were required to compute the number of cases to be simultaneously packed which varied according to the destination warehouse. Specific bundle discounts applicable for each warehouse had to be factored into the decision making process. This also meant that Franchisees had to fill out multiple order sheets for each warehouses or each product.

All of the above factors led to significant bottlenecks in the entire order-delivery and sales fulfillment cycle thereby severely limiting Fujinami's ability to scale operations with high costs eroding their profitability.

Fujinami Towel Service commissioned Japanese system integrator, Intermirage to research options for digitizing their order processing system. They wanted a scalable system that could be adopted to meet their growing needs and one that would also use their existing legacy systems (Database) and networks. Given the fluid nature of business relations with the Franchisees they needed a flexible system that allowed them to make changes easily based on business expediency. Fujinami evaluated solution-specific business application packages but concluded that in the long run such a selection would result in a spaghetti-like architecture with many end points. Their goal was simplicity of design coupled with performance and flexibility. They finally decided to use middleware-centric Enterprise Service Bus (ESB) technology and selected the Fiorano SOA Platform to deliver the solution. The key values driving the selection of Fiorano over other technologies were:

The new order processing system was built in just three months with the support of partner, Intermirage. This support included architecture design and development of functionality of security, data, and user interface screens and to utilize Fiorano SOA Platform as a bridge to those functionalities. 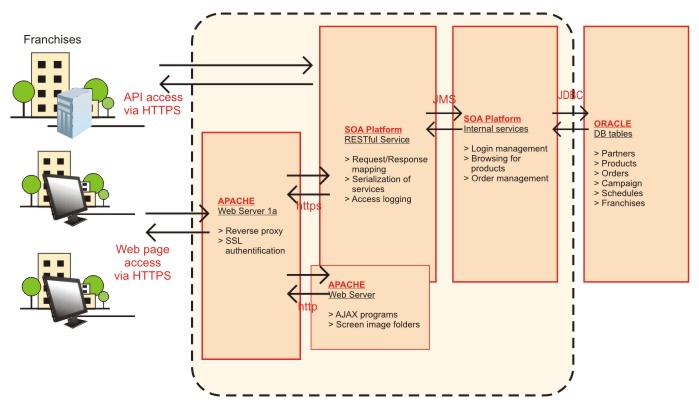 Features of the new Fiorano ESB based system:

When developing new business flows and/or user interfaces screens, changes and enhancements often occur even after beta testing. On the Fiorano SOA Platform, the business flow designer can easily deploy Fiorano's prebuilt components which map to business functions and physical IT systems. The designers were able to rapidly implement change requirements even after beta testing using just a drag-drop-deploy approach.

Web based user interface screens connect to the Fiorano SOA Platform via REST APIs (a combination of HTTP GET/PUT and XML response). This capability of communicating via a defined service API without any direct access to databases from web screens written by PHP or HTTP is very important as it is the key feature that enables flexible system expansion and enhancements. Fiorano SOA provides a REST adapter prebuilt component which got the job done via simple configuration (XSD and property sheet) settings.

Fiorano SOA Platform provides web based monitoring functions such as logging in a variety of log levels, communication recording and problem tracing. This enables effective investigation for resolving problems and error tracking.

Productivity increases were significant with the Fiorano SOA Platform; one use case took only 2 days to implement and most of that time was spent on validating SQL statements for existing databases.

Mr. Noriaki Aoki the Chief Architect of Intermirage who designed architecture of the Fujinami system noted that, "When we select an SOA platform product, we carefully evaluate implementation efficiency value per use case. With the Fiorano SOA Platform, development processes from configuration to deployment were very smooth and easy so that alternative business scenarios could be completed very quickly. In addition, Fiorano's REST adapter and event-port mechanism eliminated the effort of script coding (such as branching by IF or WHEN statements in XSLT syntax) which are required by other products. We saved significant time in creating and deploying REST APIs for business partners just by parameter settings in the Wizard."

The new order system is now available as an online e-commerce site, "e-shinzai" (e-professional-materials in English) market, and every franchisee uses the system. This new system brought numerous benefits to the franchisees and Fujinami Towel Service:

Fujinami is planning to integrate this order system with inventory management, and to expand the system for overseas operations.

Founded in 1995, Silicon Valley based Fiorano is a California Corporation with proven leadership in enterprise middleware and peer-to-peer distributed systems. Fiorano's innovative event-driven, dataflow SOA platform integrates applications and complex technologies into an enterprise nervous system, increases business process performance, yields higher message throughput and enhances availability through agent-based visual composition that bridges the capability gap between business models and their implementation - the model is the application, ready to run.

To find out more about how Fiorano can help you meet your enterprise integration objectives, visit www.fiorano.com or Email: sales@fiorano.com.