HA Locking Mechanism
HA locking mechanism is employed by the servers in replicated mode to determine the server state in case, a server of the pair is unavailable or if the network fails. A read and write permissions file is shared on a machine this file is referred as the LockFile. The machine hosting the LockFile is referred to as the gateway machine. A server can switch to Active only if it holds a lock over the LockFile.
In HA implementation prior to the locking mechanism, a network link failure between the servers could have led to both servers switching to Standalone state. Since the lock can be held by only one server at a time, it prevents both servers from switching to Active/Standalone state.
The locking mechanism makes the state switching of a HA server more deterministic. 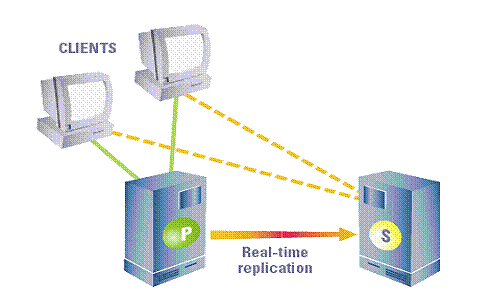 The central concept of backchannel replication is that the Active Server (the server which is in the Active State) replicates its data store and state to the Passive Server, thus keeping both servers in sync. This replication channel is supported on a private network dedicated to the synchronization of the broker state and messaging data. In Replicated HA, the database is replicated from the ACTIVE server to the PASSIVE server. This data include messages, admin/security data as well as status information whatever changes are made when the passive server was down. Whenever a server is disconnected from the network and reconnects back, the database of the active server is replicated into the passive server's database. In this case, both servers have their own copy of database but on any changes to active server's database those changes are propagated to passive server's database. In this way consistency of these two servers is maintained.
The passive server accepts no client connection while in its hot-standby (passive) role, but is prepared to immediately transition to the Active role as soon as it detects that the Active Server is unavailable. If the primary fails, all Fiorano applications fail over from the primary and reconnect to the designated secondary backup broker.
The primary and secondary broker-pair use the replication channel to routinely seek the heartbeat of the other and watch for any interruption in the data flow or connection to switch states. A locking mechanism (as already explained) is also employed to determine the state of the servers.
This Hot-failover process is immediate and is completely transparent to all client applications. The Secondary Server in the active role is sensitive to re-establishment of the replication channel. This reconnection may come from a recovery of the Primary Server or from a replacement Primary Server. Once the primary comes up again, it assumes the role of the Passive Server since the Secondary Server switched to Active Server).

Icon
Important: If servers are running in Replicated HA mode, it becomes essential to have a reliable network for database synchronization calls.

The following states occur in different phases of the servers in replication mode.

The following diagram explains the transition to various states: 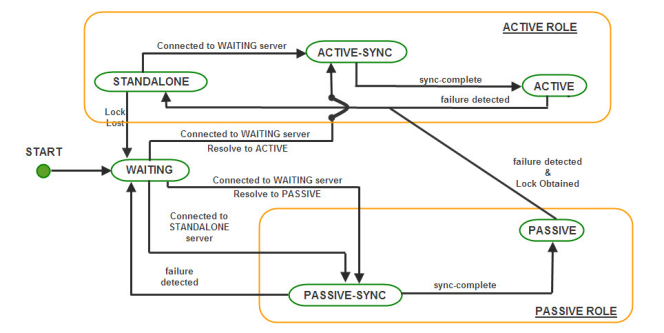 3.1.3 What are the objects that are replicated?

In the database following objects need to be replicated on Primary and Secondary server's machine: 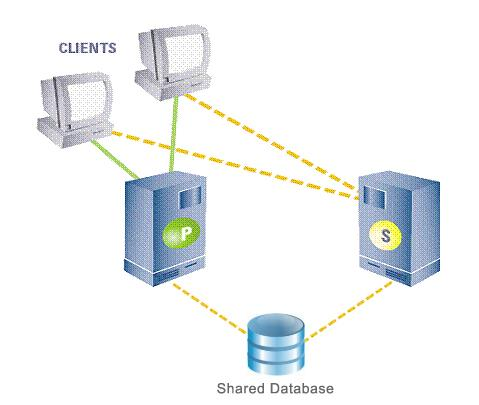 In this mode of High availability, the database is shared between the active and passive servers and do not replicate data over the network. In this, only the active server makes changes to the common database. If the Active fails, all Fiorano applications fail over from the Active and reconnect to the designated Passive backup broker. The Active and Passive broker-pair use the network channel between them to routinely seek the heartbeat of the other and watch for any break in connection to switch states. A locking mechanism (as explained in section 3.1) is also employed to determine the state of the servers. The database which is common to both the servers is referred to as the shared database.
Note: The shared database connectivity is critical for the servers to function, as the servers store all data in it. It is mandatory for the Shared Database to be always accessible to the servers. Unavailability of the shared database could lead to data loss and data corruption.

The following diagram explains the transition to various states: 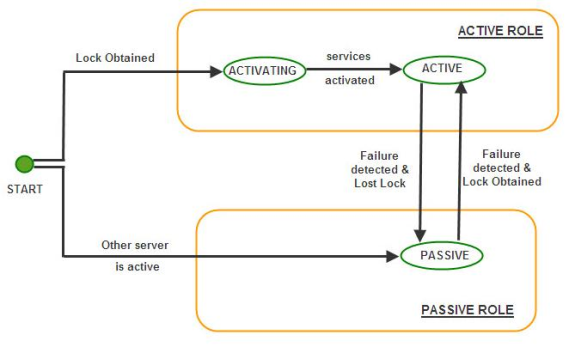 When the server starts up, the server tries to acquire a lock on the lock file. If it acquires the lock successfully, it switches to the ACTIVATING state. It then switches to ACTIVE state once all its services have been activated. Unlike in replicated HA, where the servers wait for each other to come up (that is, in WAITING state), a server in shared mode does not need to wait for its backup server to come up because they share a common database and no database synchronization is required which is the case for servers working in replicated mode.
After switching to ACTIVE state, the server keeps trying to connect to its backup server. If the backup server starts up, the backup server switches to PASSIVE state.
At this point, if there is a failure of the ACTIVE server, the Hot Standby PASSIVE Server is ready to move into the ACTIVE state and starts accepting requests from the clients.

In case the primary server becomes unavailable, all the client applications connected to it are automatically reconnected to the secondary server. The process of shifting from the primary server to the backup server or vice versa is transparent to the application. The client application should not be concern about writing reconnect logic in its code. This is achieved by connecting to the server through a Durable Connection. In case a backup server is available, the Durable Connection would connect to the backup server else it waits for the server to restart. Further, it stores all the data sent during the disconnected period in a local repository and transfers this data as soon as the connection is re-established, thus making the system highly reliable and robust even in the case of network failures.

In shared HA mode database is shared between active and passive servers.

3.3 Advantages or disadvantages / how to determine which HA to use