The FMQTerminal uses a third party library jline http://jline.sourceforge.net/. It is not a pure java library as it ships with some native code. The FMQTerminal works perfectly on the following platforms:

The password’s characters (typed) are not visible on the screen. 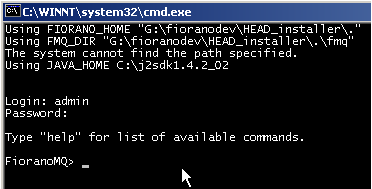 The FMQTerminal works similar to normal telnet emulators like PuTTYtel and others.

You can choose the specific FioranoMQ Server to connect to by passing the parameter mars to the executable fmq-terminal.bat (fmq-terminal.sh for Unix)

It is possible to create a properties file for each FioranoMQ Server of interest and use it by passing the file name without the extension as an argument.

If multiple servers need to be administered from a single location, the prompt can be customized to identify the Target Server.

Type a few characters and press the <tab> key for auto completion.

1.6.3 Help Command to Print Command and their Help

1.6.4 Description and Example for Command 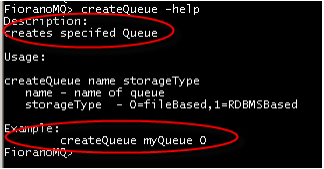 The examples above show how arguments can be passed. 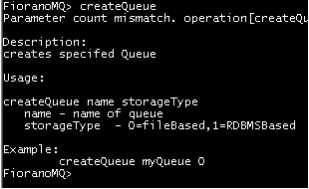 Invalid commands are displayed as 'not recognized':

All lines starting with # (a Hash or Pound sign) are treated as a comments: they and do not perform any actions.

If there is a file named mysetup.cmds with the following contents:

# Some commands on QCF

Then, it is possible to run the following commands on this file:

In the above example, -quiet can be specified as a second argument if commands are not to be echoed.

1.6.8 Adding more Commands to a Terminal

All available commands can be viewed in the commands.xml file:

A snippet of commands.xml is shown below: 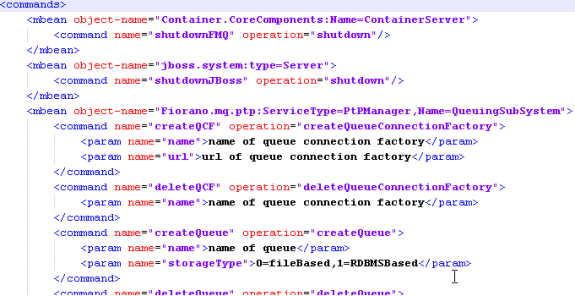 The Mbean operations are found in the studio, and they can be added to the commands.xml file. This function ensures that users are not limited to the built-in commands that ship with the installer.

To exit the FMQTerminal, any of the following commands can be used:

This returns you to the standard command prompt.